“What have the Romans ever done for us?” 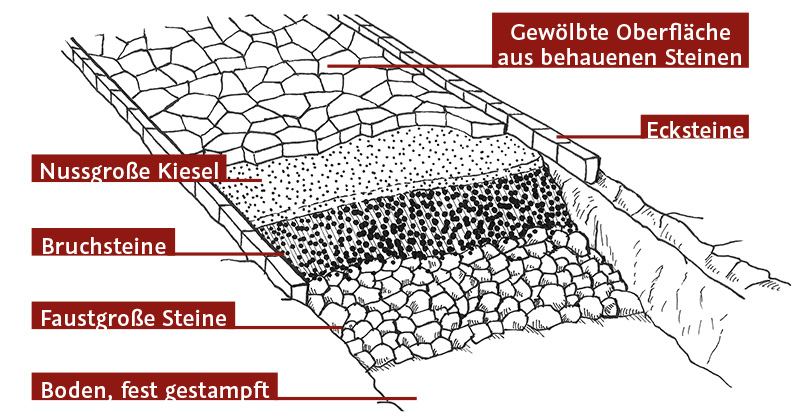 Starting out from a small city state in central Italy, the Romans built up a vast empire. How did they manage to do that? The mild climate, fertile soils and early civilizations in the Mediterranean area certainly played a role. But the Romans also relied on good organization and technical progress, erecting large stone buildings and modernizing the infrastructure. They used waterpower to drive flour mills. Their love of technology was also advantageous for mining and road construction. The good network of roads did not only make it easy for tradespeople to travel fast but also the Roman army. It was possible to travel in larger wagons – to Mühldorf too. Well protected from floodwaters, the ancient road ran along the hillside here, leading from Teurnia via Mühldorf into the mountains which were rich in natural resources.

If you want to find out more about this, you can also watch the film (in German).

“Look! My father Atestas and grandfather Atto are arriving from the east. They met up with other local chieftains in Teurnia.”

Atestas gave his daughter a hug and growled: “Oh Matugenta, the Romans want to force their laws and way of life on us. Our Celtic culture is being lost in the process: the way we dress, the way we fight, the coins we use to pay for things. Now they’re asking us whether we want to join their armies and conquer new territories with them.”

Atto, Matugenta’s grandfather, just smiled and said: “Calm down, Atestas. You can earn good money in the Roman army and are supplied with rations. Plus, as an old man, I like the Roman comforts and conveniences. I want to build a bath house here in Argentum, with underfloor heating which can also heat the walls. In addition, I like Roman herbs as well as their fruit and nut trees. You have to move with the times, my son.”

What did the Romans introduce to the Celtic inhabitants of Noricum? Do you know the answer?